Visionary VR premiered their Mindshow interactive storytelling platform at VRLA, and was quite a unique experience to be able to record an improv acting session within the body of a virtual character and then step outside of myself to then watch my performance. I’ve recorded myself with a 2D camera plenty of times before, but there’s something qualitatively different in being able to watch my body movements while immersed within a spatial environment.

The core mechanic of reacting to a story prompt was simple and intuitive, and the number of variations in how a scene plays out is only limited by human creativity. The initial Mindshow demo at VRLA had a simple linear capture where you could layer additional characters within a scene while you have previous takes play back to you. You could develop an entire story by rapidly iterating different performances of yourself much like a looping musician might construct a song.

But the true power of Mindshow will be in the collaborative features where you’ll be able to communicate with your friends with the power of the direct experience of a story, rather than by using abstracted and symbolic language. You could pass a scene back and forth to each other like an asynchronous improv performance, or you could eventually interact in real-time, once that feature is implemented.

I had a chance to catch up with Visionary VR and VRLA co-founder Cosmo Scharf where we talked about some of the inspiration behind Minshow including the Buddhist philosophy of Alan Watts and the post-symbolic, direct experience ideas from Terence McKenna.

#144: Theresa Duringer on Bazaar, a Silver game winner in the Mobile VR Jam 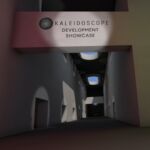